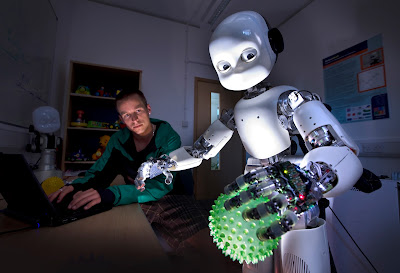 Monday, July 4th, 2011 at 10:00
room BC-300 at the Faculty of Electrical Engineering and Information Technology (Ilkovičova 3) of the Slovak University of Technology in Bratislava.
Lecture in English, discussion possible in Slovak, too.

Humans are able to acquire many skilled behaviors during their lifetimes. The learning of complex behaviours is achieved through a constant repetition of the same movements over and over, with certain components segmented into reusable elements known as motor primitives. These motor primitives are then flexibly reused and dynamically integrated into novel sequences of actions.

Several action learning models have been proposed that implement functional hierarchies via explicit hierarchical structures, such as the MOSAIC model or the mixture of multiple recurrent neural networks expert systems. However, it has been demonstrated that the similarities between various sensorimotor sequences result in competition between various motor primitive modules leading to a conflict between generalisation and segmentation. Generalisation requires the representation of motor primitives through many similar patterns present in the same module whereas different primitives need to be represented in different modules to achieve a good segmentation of sensorimotor patterns. Because of the conflict that arises when there is an overlap between different sensorimotor sequences, it is not possible to increase the number of motor primitives by simply adding extra low-level modules.

This talk will present novel results of complex action learning based on a multiple timscales recurrent neural network (MTRNN) model embodied in the iCub humanoid robot. This model attempts to overcome the generalisation-segmentation problem through the realisation of functional hierarchy that is neither based on the separate modules nor on a structural hierarchy but realised through multiple time-scales of neural activities. In addition, the model was implemented as part of Aquila cognitive robotics toolkit resulting in acceleration of learning experiments through the CUDA architecture, which makes use of massively parallel GPU devices that significantly outperform standard CPU processors on parallel tasks. The new experiments use extended MTRNN models to train the iCub to acquire reusable motor primitives. These will be subsequently used in experiments on the simultaneous acquisition of motor and linguistic skills, and the exploitation of compositional structure in both sensorimotor and linguistic representations.

For more information see the PhD section on www.martinpeniak.com

Martin Peniak is a PhD candidate at the University of Plymouth doing research in artificial intelligence.

He took a distant astronomy course at the University of Manchester, which farther boosted his interest in astronomy. This led to final project being all about Mars and autonomous rovers that can navigate over unknown terrains. Based on the results of this project he get a 3-years PhD studentship on iTalk project. He was awarded a Revell Research Systems prize for being a top final year student on the BSc(Hons) Computing programme.

Currently he is doing PhD research in composition of actions and language for iTalk project, which aims to develop artificial embodied agents able to acquire complex behavioural, cognitive, and linguistic skills through individual and social learning.